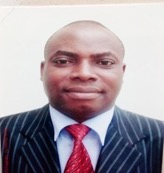 Prof. Oluwagbenle, Henry Niyi who was formerly known as Ogungbenle Henry Niyi is the current Head of Department, Chemistry. He is a Professor of Analytical Chemistry. He presented the 49th Inaugural lecture of Ekiti State University, Ado-Ekiti, Nigeria on the 25th September, 2018; titled ‘No food No life’. He attended L. A. Primary School, Oba Akoko, Ondo State (1974-1980), Oludaye Grammar School, Oba Akoko (1981-1983) and Victory College, Ikare -Akoko (1984-1986). He also attended Ondo State College of Arts and Sciences, Ikare -Akoko (1988) where he obtained the General Certificate of Education (GCE).

He later proceeded to Ondo State University, Ado-Ekiti (now Ekiti State University), Ado –Ekiti (1989/90–1992/93) for the Bachelor of Science (B. Sc.) degree in Chemistry with Second Class (Hons) Upper Division. In his quest for education, he proceeded to the Federal University of Technology, Akure where he obtained the Master of Technology in Analytical Chemistry (1999) and the Doctor of Philosophy degree (2004).

He joined the services of Ondo State University, Ado-Ekiti (now Ekiti State University, Ado-Ekiti) on 4th of September, 1995 as Graduate Assistant immediately after his National Youth Service Corps in 1994/1995. He rose through the academic ladder to the position of a Professor on 1st October, 2015. As a researcher, he has over fifty scientific publications to his credit in both local and international journals. He is a member of many professional bodies and associations.  He is external examiner, assessor to some universities and a reviewer to some local and international journals.

Services within the University:

He is a Pastor in the Redeemed Christian Church of God (RCCG). He is happily married to Pastor (Mrs.) Bosede Omolade Ogungbenle and blessed with good children.